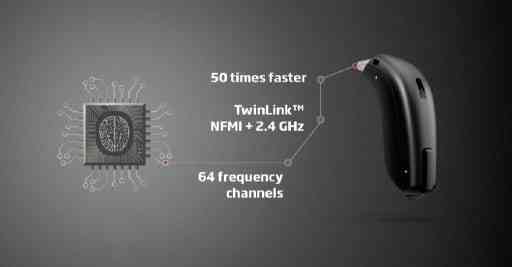 The new Oticon Opn ™ has been released to the Australian market late June 2016. It packages a group of new technologies that purport to translate into “30 % better speech understanding in background noise, 20 % reduced listening effort and 20% improvement in recall of conversations owing to reduced cognitive load or processing load on our brain.

The system represents a shift away from the approach of using adaptive directional microphones that can create a narrower beam of focus in higher levels of background noise. Oticon’s marketing claim that this narrow directionality (microphone beamforming) what they term “tunnel directionality” limits the users experience by not preserving the diverse, dynamic and unpredictable nature of the listening environment. Other manufacturers that promote the benefits of beam forming microphone technology claim that the narrow directionality of beam forming directional microphones only automatically activates upon detecting higher levels of competing background noise to enable the listener to focus on the speaker they are directly facing limiting input of invasive noise from the sides and from the rear.

By better preserving the full sound picture Oticon aim to reduce listening effort and improve ability to switch attention readily by preserve the full sound picture and hear what’s desired. This adheres to Oticon’s Brain Hearing approach that aim to develop hearing aids that support the way our brains “Orient, Recognise Separate and Focus on sounds.”

Oticon Open features the latest micro processing chip platform called the Velox ™ developed in house in Denmark by Oticon. The new platform is purportedly 50x faster then the previous Inium Sense ™ microchip platform found in the Alta 2 range and is now capable of 1.2 billion operations per second. It is now the new industry leader in terms of having the fastest digital processing chip set. Noise filtering and microphone adaptive directionality can occur seamlessly over a relatively high number of 64 digital processing channels. The new Velox ™ chipset also has a new analogue to digital converter (A2D) that increases it dynamic range from 92dB to 108 dB giving the benefit of better sound quality and less distortion in listening environments with higher levels of background noise. Oticon call this ClearDynamics ™.

Another industry first is that the new Oticon Opn features TwinLink™ wireless systems, which is two dedicated wireless systems on separate frequencies. One to create a broadband link between the hearing aids so they are coordinated in all their real time functioning. (Binaural processing) and the other to enable the connection with blue tooth enabled devices such as mobile phones and tablets with reliable 2.4GHz streaming. Oticon Opn directly connects with Bluetooth devices such as iphone, ipad and ipod and is also compatible with Android mobile devices with the use of a microphone lapel clip. This negates the need for a neck worn device. There is also a new remote control 3.0 which is very useful for people with dexterity issues. There is also a new T.V. adapter. These new hearing aid accessories are not backwards compatible due to the new operating frequencies.

The new Oticon On App allows for direct remote control of the hearing aids from both Apple OS and Android devices and Oticon Opn also enables the world’s first internet connecting hearing aids. Using your phone with the hearing aids you can access the “If Then This That platform IFTTT” (www.ifttt.com) which connects different services and products. For example if your IFTTT enabled doorbell rings you also receive a wireless notification via your Opn hearing aids that the doorbell is sounding.

These revolutionary new hearing aids represent a great forward step for all people with hearing loss. Even people with mild hearing loss can benefit from the improved speech clarity, noise reduction and reduced listening effort. This combined with direct wireless connectivity to smart phones, tablets and other internet enabled devices Open’s up a huge dimension of capability.

For more information or a to book a free trial of these great new hearing aids please don’t hesitate to contact your hearing care professional at Harmony Hearing & Audiology.