Leading American brand Starkey was founded in 1967 by William F. Austin who initially had a retail and repair shop for hearing aids. Starkey has its headquarters in

Eden Prairie Minnesota. Today they are one of the big 5 hearing aid manufacturers in the world that control more than 80% of the global hearing aid market. They invest heavily in research and development. According to Doctor of Audiology Abram Bailey Aud, they deliver “innovations in sound processing, wireless technologies, and miniaturization. Today, Starkey Hearing has more than 5,000 employees and operates in more than 100 countries.”

Starkey provide a range of hearing aids in all styles, technology and for all levels of hearing loss.  They were one of the first to innovate miniaturisation technology to make true custom invisible in the canal hearing aids (IICs). The Starkey Sound Lens being on the forefront of very small deep canal fitting hearing aids. They also produce excellent Receiver in the Canal (RIC) and Behind the Ear (BTE) style hearing aids.

The following timeline shows a progression of their hearing aid generations:

The Evolve AI hearing aids cover a full range of styles from an invisible in the canal (IIC) to a power behind the ear style (BTE). A new addition is the wireless completely in the canal model (CIC), which is now the worlds smallest wireless hearing aid. As you move to higher tiers of technology (budget permitting) you can expect to attain greater listening comfort in competing noise environments due to the feature set. This includes reducing machine noise, reducing noise mixed in with speech, reducing noise that is transient such as a door slamming and reducing wind noise. The Premium 2400 AI level gives access to Edge Mode with a simple double tap of the hearing aids and Voice AI.

One of the most popular and unique models is the smallest invisible in the canal model the Starkey Evolve IIC. It is important to note that this is a non-wireless version that cannot stream audio directly from smart phones through the hearing aids. As Starkey have been making custom IIC hearing aids longer than other brands they are one of the best at making them the smallest. It is important to realise that as these devices sit in a moist humid ear canal all day every day they are vulnerable to breakdowns due to moisture or wax ingress either into the speaker (receiver) or microphone ports so do need to on occasion go back to the manufacturer for repair. This is another important reason to seek a long term relationship with a reputable hearing clinic for these styles of devices.

New in April 2022 to the Evolve Ai range is the Starkey Evolve Ai CIC Wireless. This is now the smallest hearing aid model to be able to bluetooth stream audio from smart phones and other devices. The bluetooth antenna is logically built into the removal line.

As they use bluetooth low energy you can stream audio from both Apple iOS and Android smart phones and devices. This includes your phone calls and media such as pod casts and music.

You can also connect these wireless CIC hearing aids to the Starkey Thrive App which gives you control of your hearing aids in terms of volume adjustments, being able to access different programs for specific listening environments. For example a restaurant program to improve noise filtering in noisy cafe's or restaurants. 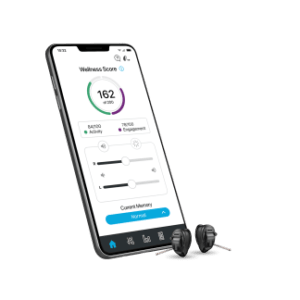 One of Starkey's biggest recent innovations has been the introduction of the Evolve Ai custom rechargeable hearing aids. With a potent lithium ion rechargeable battery to power you though a full day of hearing irrespective of how much audio streaming you are doing.

There are also three Receiver In the Canal (RIC) versions of the Starkey Evolve Ai. These are the two disposable battery versions the Evolve Ai micro RIC and Evolve RIC 312 and rechargeable RIC R as shown in the image below. The rechargeable version of the RIC only take about three hours to charge and gives you plenty of power throughout your waking day. These are very discrete hearing aids and can help minimise the occlusion effect. The Occlusion Effect (OE) is that blocked sensation you get when you plug the ear with a large mass such as a custom in the canal device or an ear mould. It  can also result in your own voice also sounding loud and boomy in your head. By minimising the mass in the ear canal with a miniature receiver (speaker unit) coupled to the ear with a thin rubber, acoustically open dome the occlusion effect is minimised. There are numerous other advantages to this style of hearing aid. 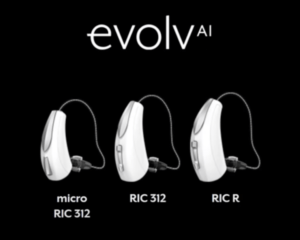 If you have more of a severe hearing loss or chronic external ear canal condition then the Evolve Ai Behind the Ear (BTE) range of hearing aids may better suit your needs. The Evolve BTE Power Plus can be suitable if your hearing levels are moving into the profound ranges. They can use either a size 13 hearing aid battery or a lithium ion rechargeable battery. 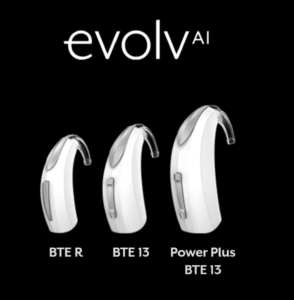 Compared to it's predecessor the Starkey Livio Edge there has been the following enhancements:

Edge Mode refers to to a form of artificial intelligence based analysis of your acoustic environments that optimises the noise management and speech understanding using what's called Edge computing. In the Premium Evolve 2400 this is accessible with a double tap in select models and in the 2000 and 1600 models can be accessed through the Thrive App. It improve comfort and speech understanding in complex listening environments.

Starkey Livio is the latest flag ship model hearing aid from leading American manufacturer Starkey. They state “Livio AI and Livio are our best sounding hearing aids.” Users can enjoy excellent sound quality and clarity even in the most complex listening environments with competing noise. Using integrated sensors and artificial intelligence the Starkey Livio AI can track brain and body health. Motion sensors detect if you have fallen and notify a loved one or carer.

They come in styles that use either disposable batteries (Size 312 or 13) or built in Lithium Ion Rechargeable. The All-in-one charger holds enough charge to provide portable charging three times.  Starkey claims it is the smallest 2.4 GHz rechargeable RIC with streaming capability. There’s a smaller Mini Turbo Charger that gives 3.5 hours of wear time in just 7 minutes with x4 repeat charges.

Streaming Support from Apple and Android:

Sensors that detect motion, gestures and activity are integrated into each hearing aid. Users can manage their health information via the Thrive App. This empowers users of all ages to take a pro-active approach to their wellness.

Personal reminders can be delivered in the ear or on screen such as for taking medications.

Acuity Directionality: improves speech detection and separation in complex listening environments. Identifies and preserves speech signals from wherever they are coming from. Up to 6dB speech enhancement even when the speaker is behind the wearer.